I'm just returning home from CMEA 2020, full of good food and good memories (but running low on sleep)! I think this is the most I have ever enjoyed the conference. Why? Mostly, it comes down to purpose - I knew why I was there, I knew what I wanted to get out of it, and that helped guide me toward a great conference experience!

Here's the thing about being in my position - most of the sessions are designed for current music teachers. I struggled a little bit last year trying to figure out what to go to - should I go to the things I am interested in (which mostly align to my strengths)? Or places where I need to learn and grow? It's awesome if a session has "strategies that can be implemented in your class on Monday," but without a class of my own, what was I supposed to do with these tips?

This year, I made it simple. I wanted to go where the teachers in my district were going. My purpose in being at the conference was not to take in a ton of great learning for myself (although that is always a benefit), but to allow me to better support my teachers. Obviously if they were presenting or performing, I was in that room, but beyond that, if one wanted to go learn how to start a mariachi group, I wanted to be right there beside her, hearing the same things so I could be a thought partner as she starts out! Knowing we just implemented full-day kindergarten in my district, which doubled the number of minutes of music, I wanted to be in the kindergarten session to get ideas for how to engage our youngest learners for an extended amount of time. And if a teacher wanted to talk for a bit in the lobby, outside of a session, that is where I wanted to be.

It ended up being a great balance! I still went to a couple of sessions that I just wanted to experience personally, but they were ones that didn't conflict with anything that I felt really compelled to be at with the teachers in my district. And, after going to sessions with teachers, we were able to have some great instructional conversations because we had a common base to start with!

All in all, this clarity of purpose helped me evaluate and prioritize my schedule and not feel guilty about choosing one thing over another. It made me wonder - should I be thinking about this for any (large) conference I attend? How much better would my professional learning be if I invested a little bit of thought ahead of time about what I wanted to get out of it?

It was great to see people from all walks of my musical life. It was great to learn a lot. But, most of all, it was great to build relationships, appreciate the talent in our district, and see how excited everyone was about offering the best possible instruction to their students! I may be tired, but a little bit of purpose goes a long way in making this an extremely successful conference!
Posted by Aubrey at 7:21 PM No comments:

It's fascinating to think about how culture shapes who we are, how we think and process information, and how we act. I've been thinking about this more lately as I read Zaretta Hammond's Culturally Responsive Teaching and the Brain. This may eventually turn into a series, but for now, I want to focus on the first part: self-awareness.

So, who am I? How does my culture impact me? Well, I'm half-Chinese. This means that half of my extended family doesn't speak English as their first language, serves (somewhat) different food at home, and sometimes have different ways of communicating ideas (that are more typical in Chinese culture). Although I have never lived very close to them (geographically), they have always been a presence in my life, and I have always felt connected to this piece of my identity.

[On the other side of the family, I have ancestors who moved to the USA a couple of generations back from Europe. While I don't want to neglect this side of my past, it is much more similar to the dominant culture where I live, so I am going to focus my blog on my half-Asian side.]

While it's hard to pinpoint the exact implications this has had on my life, I wanted to write and reflect on a few ideas here:


This has been a learning journey for me, and one that I have struggled with how much to say on a public blog. Examining your own cultural background, implicit biases, and thinking about how it interacts with others' is deep work - and easy to misinterpret on a blog without the benefit of non-verbal communication! At the same time, not talking about it enables current patterns to continue, so I feel compelled to write something. Curious to talk more about this? Please reach out - I'm happy to have one-on-one conversations in more detail!

How does your culture influence you? How are you building your own capacity for cultural responsiveness?

Posted by Aubrey at 2:25 PM No comments:

Although I enjoy reading, 2018 is the first time I tracked the books I read over the course of the year. Last year, I am happy to say that I read 52 books - one for each week! Some thoughts & reflections are below.

Refugee Ready
As a part of my #GoogleEI project, Refugee Ready, I am trying to put together a good book list of books featuring refugees. Of course, before I include them on a list, I want to read them! 32 of my 52 books for the year were related to refugees, and it was a great way to expand my horizons and read diverse titles that normally wouldn't be on my radar.

Professional Learning
Although I like reading to learn, I generally find that I prefer to come home and escape into a good book. That being said, I read 7 books this year that drove my personal professional growth, and another 5 YA books related to my new role (working with Language Arts), because I wanted to see what the kids were reading in their classes. I expect this number to go up in the future as I continue to learn what literature for LA class looks like in 2020, which is different than when I took it many years ago! There has been a strong focus on diverse, engaging, relevant texts, which is fun for me to read!

The Rest
So what were the other 8 books? Easy reads - either children's books or YA series! As I said, reading is a great way to relax for me, so I don't like anything too heavy or hard. Something that I can cruise through and enjoy is perfect!

I always wish I had more time to read, but I am happy with the fact that I was able to spend at least some time in books this year. Maybe next year will bring more? We will have to see! I don't really set reading goals for myself, other than wanting to continue reading, expanding my repertoire, and practice good self-care by taking these quiet moments to myself. Here's to a 2020 full of books!
Posted by Aubrey at 2:52 PM No comments:

As I pondered my #oneword for this year, one word continued to stick out at me. At first, I wasn't sure - rather than being one idea to center my year around, it seemed to boil down to three different concepts that are all united by the same word. As time went on, though, I continued to feel drawn to it, so here I am with my #oneword2020: 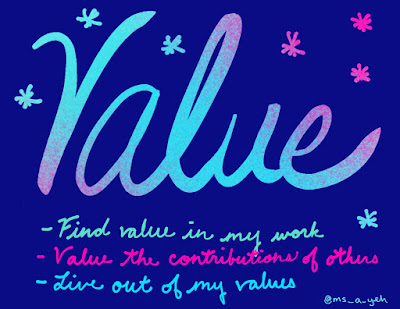 What do I mean by that?


Finding VALUE in my work

No doubt about it, the end of 2019 was challenging. As I continue to figure out how to move forward and improve, one big thing I want is to find and see the value in the work I do. When I was teaching, it was much easier to know that, no matter what else the day held, I was making an impact on a kid's life. Now that I work in central office, I am more removed, and I have to work a little harder to find the value in how I spend my hours.

Ultimately, I think all of us want to know that we add professional value to our organizations, and in a larger context, to the people around us in life. Which brings me to my next point...

VALUING the contributions of others

How will I do this? Well, to start, I have a practice of trying to recognize the positive & write encouraging notes weekly, and I want to leverage that to be more intentional about where I am looking to find the positive. I'm sure other opportunities will come up, but this is one concrete action step I have in mind already.

Living out of my VALUES

When it comes down to it, times of struggle really show us what we value. As I go into this year, I want to stay centered around my faith and my values, and let them guide my actions.

It sounds really easy on a Saturday afternoon wrapped in a blanket with a cat on my lap...but I know that this intention will be put to the test in the real world!

Each year, I find that the #oneword I pick in January plays out in many ways - some expected, some not - by the time I get to December. I look forward to this journey in 2020!

Posted by Aubrey at 2:09 PM No comments:

Email ThisBlogThis!Share to TwitterShare to FacebookShare to Pinterest
Labels: oneword

2019 was a weird year for me professionally - a year of growth and change. I would really divide it into two parts: the end of the 18-19 school year (when I was in one position) and the beginning of the 19-20 school year (when my position changed). My #oneword2019 was courage, and I needed in both phases!

Here's what I wanted to have:


The first half of my year was all about courage and growth as a leader. I'm proud to look back and say that I did try to do what is right, not just what is easy, to have some tough conversations, and to lead with confidence. I also had the courage to take on a leading role in our district's strategic plan, something that felt way over my head! I grew so much in being willing to make hard decisions and stand behind them, yet (hopefully) deliver them with grace and compassion. I came out feeling stronger, and realizing that I really could do some things that scared me...and do them well! It wasn't all positive, but I am happy with the way I was able to put courage into action. 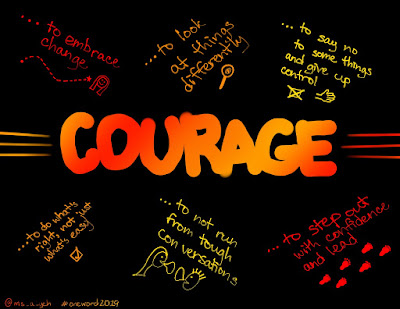 As I transitioned into my new role over the summer, a different kind of courage was required. I found myself often having to reflect on that bullet point of saying no to some things, because they were no longer my job...which was hard! I needed the courage to embrace change, because whether I wanted it or not, change was here.

To be honest, if I were to pick a word for the second half of my year, it would be struggle. Struggle isn't always bad, but it isn't ever easy. And it takes courage to keep going through struggle.

In an unexpected way, through the highs and the lows, courage ended up being a very appropriate word for my year. It's something I know I need to carry with me into 2020 as I continue to hope through the struggle. But a new year is a time to focus on a new word.

What will it be? Stay tuned!