As 2018 comes to a close, I am sitting in a warm house, looking out at the sparkling snow, with much to be grateful for. A new job (which I love!), new experiences (best of all, #DEN18), and so much growth, both personal and professional. I want to look back on my #OneWord2018 to guide my reflections.
*Fair warning: This post is about me, and I feel a bit selfish writing it. But isn't that what personal reflections are? 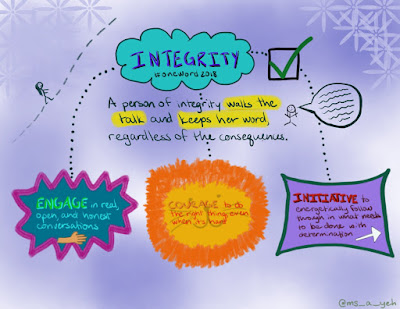 This year, I wanted to focus on integrity, with three components being engage(ing), courage, and initiative. This played out in many ways as through the year!

In January, I was able to be spontaneous and engage with new friends as I took a trip to California to meet #PLN buddies in person! I also enjoyed a trip to string camp, in which I found & had the integrity to admit, for the first time, that I was happy to be in ed tech and moving on from my time teaching in the classroom.

In February, I celebrated the culmination of my #OneWord2017 (LEAD) journey by summoning the courage to press "submit" on my PRAXIS (spoiler: I passed)!

In March, I did a lot of reflecting, and took the initiative to really think about #selfcare as a part of being a healthy educator.

In April, I earned my #GoogleET certification and blogged publicly, for the first time, about my desire to apply for the #GoogleEI program - it took courage to put it out there for accountability!

In May, I wrote about continuing to learn and grow as an ed tech leader and engaged in "real talk" as I shared my first #GoogleEI application and thoughts along the way.

In June, I wrote with integrity about my honest feelings about not getting into #LAX18, enjoyed seeing ways that music teachers were taking initiative to take ideas even further, and met SO MANY friends IRL at #ISTE2018! What a highlight that was, and a reminder of how special it is when we are ourselves - both online and in person - rather than wearing a mask or putting on a persona!

In July, I engaged in some more honest sharing as I wrote about changes (having no idea what was coming in my own life) and took the initiative to not only attend another #EdTechTeam summit but convince my brother to present with me (which was amazing)!

In August, I learned about taking a step back and allowing others to find the courage to lead and published one of my more popular posts of the year with the results of a survey about what people were looking for from ed tech specialists in schools that I took the initiative to put together.

In September, a lot happened as I had the courage to put myself out there! I moderated my first Twitter chat, applied for #GoogleEI again (and got accepted this time!), and started a new job. Talk about a big month!

In October, I thought a lot about leading with integrity and what that meant in my new position - from the messages I was sending to the struggle with balance to the need for courageous choices & conversations.

November wins the award for the most blogs written in a month, because I was at #DEN18 and blogged my way through! I made the decision after the first day of the academy to write vulnerably and engage in a real, raw way, which took courage and initiative. It ended up being a great experience that further fueled my desire to live with integrity and walk my talk of what I think is important!

Which brings us to December, where I exercised that integrity by making sure I was living a life that demonstrated #selfcare, took the initiative to bring some fun to the office, and wrote about my struggles and lessons learned with listening to others.

It's been a great year, and I truly see how my #OneWord2018 was woven in and out of my experiences! What will 2019 bring? Check back next week to see my #OneWord2019 and let's find out! Happy New Year, everyone!
Posted by Aubrey at 8:28 AM